Check Out the Axillary Glands on This One 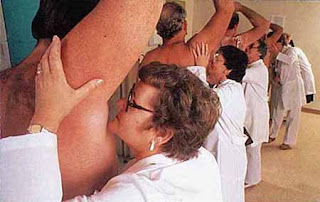 Smell dating. Do me a favor and don’t take off that t-shirt for a few days. Get it all fumed-out. Now send it to us; we’ll cut it up into pieces and ship it out to potential mates. If they like what they smell, you’ve got yourself a date.

Yeah it's cute, but let's get something straight - when you choose a mate based on their armpits, it is your offspring that benefit, but not you necessarily.

Yes there is truth to this; it's pretty well-known: People tend to prefer the smell of others who have complementary immune systems. This makes your offspring have super-immune systems.

The thing is, it's not the Pleistocene anymore, and we don't have to choose mates based on major histocompatibility complexes via volatile metabolites. I mean, who said I even wanted to reproduce, I'm just looking for a date for this Friday, right?

In this case, smelling t-shirts is funny, but it's not so practical these days. Dating someone because of their MHC is like dating a robot because you like their algorithm.
Posted by Self Replicate at 2:59 PM No comments:

Let us for a moment recall that Vice episode on Liberia where we met the most fearsome of all warlords, General Mosquito, named after the deadly killers that terrorize the local population, and his arch-nemesis, General Mosquito Killer, who made himself invincible to his enemies by eating kids before a battle, although not necessarily microcephalic kids.

Now, in humans’ never ending battle against the seemingly non-threatening creatures that live here on Earth with us, we have reached new heights.

Ingenious people in Brazil made a wall that secretes a human sweat analogue and exhales human breath. Mosquitoes smell this sweaty signal of blood-pumping meatbodies, and they attack. It’s basically a mouse trap, but instead of cheese, it’s…well, I wonder if the artificial sweaty skin wall eventually develops cheese if it isn’t washed properly.

A couple things to mention and consider: what if these mosquito-traps bring extra pests to a populated place where they would otherwise not have gone to, making the problem worse?

And then also, what does this thing actually smell like? Although it does emit the same volatile compounds as your sweaty commuter-friend’s t-shirt, they won’t have to be anywhere near the amount required for humans to perceive it. And lastly, before you get any ideas, don’t forget that a flat surface is the best way to evaporate stuff, so a fake sweaty person standing on the corner would not have the same effect.

Posted by Self Replicate at 7:38 AM No comments:


As an initiation, and as a first test post, I offer to the internet this beautiful mystery of organic chemistry - a hydrocarbon.

This is a visual representation of the benzene molecule by data scientist David Gunther. It is perfectly radially symmetrical, the most perfectly-formed of all the organic molecules, and in fact the name from which all ring-structure molecules are named - The Aromatics.

The smell of benzene is distinct. In some places of the world, gasoline is called benzene. It is the quintessential hydrogen carbon bond, a perfect, if transient, product of molecular mathematics. The molecules bond with each other in a ring, making it an isometry of the mythological uroborous, the snake that eats its own tail. This carbon-ring structure of the benzene molecule was discovered by August Kekule in the 19th century, brought to him in a hypnotic state of repose, as chains of carbon and hydrogen atoms danced in his head. Nostradamus was the first to isolate the benzene molecule, and from his own urine. Check my sources on that, I think I'm making it up.

But as for the picture above, it is a data map of the position of the molecules. The hydrogen-carbon bond is transient, dynamic. The molecules are forever dancing, in a quantum superposition, and hence the smeared visual effects of this graphic. Thanks to David Gunther for this beauty, and if only Kekule could see it!

And so we're off to a good ramble, just to get things started. I'd like to give thanks to this webspace for allowing me to populate herein. Onward.
Posted by Self Replicate at 7:43 AM No comments: