Somewhere in England they are now programming smoke alarms with your mother's voice instead of an ear piercing siren, because it gets you out of bed quicker. The precious seconds saved could also save lives.

The reason the sound of your mother's voice can turn on your inner alarm faster than a fog horn, has a lot to do with our nature as social creatures, and of course, our limbic systems.

The limbic system is the part of us that takes flight in a dangerous situation. It is a brain inside our brain, and if it had a brain inside it, that would probably be the amygdala; I'm sure you've heard of it. It also holds the hippocampus, also known as the memory bank.

The limbic system operates beyond our conscious control. It has to, because it's a big part of what keeps us alive before we even become "conscious." It learns from its environment, and responds accordingly. A major part of that environment is the people around us.

This is because our limbic system is, shall we say, very open to suggestion when we're young. It's kind of like a blank slate of a book, or an instruction manual, where every word that's written starts out really big, and gets smaller and smaller as we age.

And who is one of the first people to write in this book? Your mother. She codes her voice so deep into your autonomic nervous system that the sound of it can activate your limbs faster than flash of lightning.

So it only makes sense that if we are looking for a shortcut to the body-control-system, this would be it.

Robet Sapolski's Stanford lectures in Human Behavioral Genetics are a great place to learn about this kind of thing; he is a skilled and engaging lecturer.

Millions on prescription sleeping pills would sleep through a fire alarm
Jan 2019, phys.org

Post Script
Consider this idea in light of the developments we see today in robotics, or in any instance of digitally-mediated human assistance. Robots that take care of the elderly in the absence of their progeny, or who take care of people of reproductive age in the absence of a mate. The limbic system is a powerful thing, and it will certainly be exploited.

Post Post Script
Elon Musk did a surprisingly interesting job of describing all ^this in his infamous interview on the Joe Rogan show.

Post Post Post
Amygdalic is a word, but it doesn't do what you want it to in this context. It comes from chemistry and it means made of almonds, or rather the amygdalin contained therein. And now you got me started, almonds do also contain cyanide, but not enough to kill you, you robust biological specimen! If you ever had a rotten almond, you can pretend that's the cyanide in your mouth. Not totally sure about that, but there is another species of almond, actually called the bitter almond, that has more cyanide in it, and is also the almond used to make almond fragrance. The amygdala got its name because it is shaped like an almond.

Posted by Self Replicate at 1:36 PM No comments: 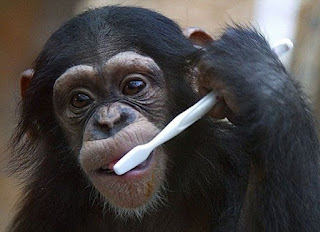 Hanging out with some friends the other night, and as bedtime rolls around, I hear my friend say to her son, "Come on, time to get minty."

I was also set wondering why I had never heard this before; it makes so much sense. But my next thought is the one that took hold – why is toothpaste minty?

Today I'm here to tell you why toothpaste is minty; there’s two reasons. One of them makes sense and the other does not.

The easy answer for why toothpaste to this day remains minted lies in the trigeminal properties of mint. The trigeminal sense is not so much a sixth sense, but more like 5 1/2. When things are sensed as spicy-hot or minty-cool, that is the trigeminal sense being activated. This effect creates a habit cycle by making you think your breath is fresh after brushing because your mouth feels cooler.

That's a good reason. But there are other things that produce trigeminal effects. Jalapeno peppers would make a good toothpaste on this account. (Why does it have to be cool?) Then there's cardamom seeds. And fennel. Why isn't toothpaste made of liquorice?

Coincidence, that's why. Mint just happened to be the flavor of the toothpaste to land on Claude Hopkins doorstep. He is advertising's first master manipulator, and the man responsible for the reason we brush out teeth.

I know this might sound crazy, but prior to Pepsodent in the 1900's, people did not brush their teeth. Crazy. We had to be duped into it by a marketing campaign. And dupe he did – 100 years later, here we are, still getting minty before bedtime, every night.

It is unclear as to whether Hopkins knew the power of trigeminal effects in creating a habitual feedback loop. But he definitely understood the concept of the loop.

When his client came to him for help selling his new tooth-paste product, Hopkins spent hours and hours reading about dentistry and oral hygiene, until one small illustration struck him.

A page in the book indicated that there is a film that forms on the surface of your teeth, and all over your mouth. In the dental textbook it's called mucin plaque, but he called it "the film." The film is always there, and it's always been there. But Hopkins was a mental manipulator maximus.

He transformed that factoid thus:


You – run your tongue over your teeth, you feel that? That's a film of gross nasty schmutz that accumulates on your teeth every day. It's gross, and it also makes your breath smell. You like that filthy mouth film? No, no you don't. So why don't you get yourself a tube of Pepsodent, and scrub it right off. There. Feel that mint-flavored freshness? There, all better.

Feeling the film on your teeth was the cue, and having a fresh mouth was the reward. These two work together to rewire your brain until we have a habit. For things like nicotine and smoking, the cue is a physiological imbalance, because nicotine is addictive. But for other things that are not drugs, we must create a habitual loop.

Claude Hopkins knew this, and with this knowledge he set a civilization on the path to oral health. The fact that this path was minty fresh was kind of inconsequential. And since we're here talking about this, I should add that in India, where mouth health has been a big deal for much longer than toothpaste, they have a few different approaches. Cardamom, fennel, and fenugreek are sometimes roasted, sometimes candy-coated, but usually chewed after a meal.

Would fennel toothpaste ever take off? I'll keep my eye out the next time I'm in Trader Joe's, or that little Vermont grocery store.

And now for the final reveal, the first Pepsodent wasn’t even made with Mint, it was made with Sassafras (think Root Beer). I will assume this was categorized as “minty.”  I’m also having a fuzzy recollection that Burt’s Bees makes a clove toothpaste?

Notes:
How the history of toothpaste explains why you can’t lose weight
Charles Duhigg for Slate
https://charlesduhigg.com/how-the-history-of-toothpaste-explains-why-you-cant-lose-weight/

Charles Duhigg wrote a book about habit formation, called The Power of Habit. I wrote about Charles's book in my book called Hidden Scents.

Posted by Self Replicate at 1:13 PM No comments: