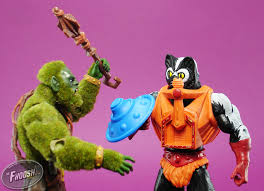 I wonder how many other middle-aged men are selling their childhood toys on ebay right now. (Actually, I wrote this for my other blog, just about one year ago, and all my toys are now gone, and in their place I got enough money to buy a plane ticket to the Institute for Art and Olfaction in Los Angeles, California.) It certainly has been a trip down Memory Lane, but I find it somewhat embarrassing that I missed these two guys in the process.

Moss Man and Stinkor are action figures from Mattel’s He-Man and the Masters of the Universe line, circa 1985. They stand out because they came with their own smell - Pine-Sol and Patchouli, respectively. According to the interwebs, Mattel actually poured patchouli oil into Stinkor's mold, to hold that baked-in freshness for eternity (or Eternia, as it were).

This time capsule of the olfactory imagination is no match for Strawberry Shortcake, mind you, who's perfumed hair no longer smells like strawberries. (I'm going to speculate here that Moss Man's scent was also added to the furry moss on his body; not as permanent as Stinkor.)

So one would think that to open a box of thirty year-old He-Men I would be transported by this odormobile to a time long forgotten.

As it turns out, the overall nostalgia from all that visual and tactile stimulation overpowered the triggers of Stinkor's scent. I've already sold all my He-Men, and I don't remember smelling a thing.

But the real question, since when is patchouli a stand-in for skunk?

Or, maybe Mattel had some real jokesters on their team.

Go to the main He-Man website for more information

Posted by Self Replicate at 8:52 AM