Genes, Skin Creams and You 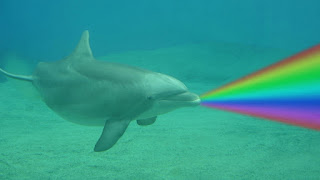 Will Your Baby Like Cilantro? These Genetic Tests Say They Can
Jan 2018, Wired

In short - BabyGlimpse is a $259 test using parents' DNA to predict not only physical features such as hair and eye color, but also taste preferences. (It's true, there's genes that make sugar "taste" better to some, broccoli taste worse, and cilantro taste like soap.) This is called direct-to-consumer genetic testing, and it's a budding industry.

It's supposed to be for fun, but public health experts aren't laughing.

At least that's the angle of the WIRED article I'm looking at here. They also bring up the problem with labeling people. For example, there's a gene that codes for your ability to recognize noise patterns, and could make you a musician, or not.

Genes are complicated (I believe the correct phrasing is "genomics are complicated"). Environment and epigenetics change the way your genes are expressed. Whether or not you eat your vegetables, whether you're skin is one color vs another in a country that was built on such a distinction, those are "environment". Whether your mom was pregnant during the Great Potato Famine, and whether, again, your mom grew up subject to the stresses of racism, those are epigenetics.

You can't predict how those things will affect your genes, and so to label someone good or bad at something at birth could effect their outcome in life. A scientist consulted for the article calls these results the genetic equivalent of skin cream for wrinkles (which is a pretty good dis if you ask me.)

All we really care about here at Limbic Signal though, are the hard stuff - the genes that make your hair brown or your eyes blue, or your armpits smell or not.

Anosmia, or smell-blindness, is caused by a defective, or inactive gene. We have lots and lots of genes for smell, more than any other gene family, in fact. And we are still evolving in regards to smell. And look at how dolphins, who I guess used to be land-dwelling mammals, have had most (all?) of their smelling genes turned off now that they live in the water, and (I guess again) they will have to continue to live in the water for a very long time until they develop again, if they ever do.

We humans are still in the process of selecting which things we should be able to smell and which things to not waste our time on. And in the meantime, we differ greatly in the genes which have been turned off. Some folks can't smell semen, some can't smell rotten fish, some can't smell farts. For the most part, these folks won't be at a disadvantage as a result of their smell-blindness (unless, of course, in the case of not being able to smell a natural gas leak, but that's a big exception.)

Nonetheless, if you find exciting the prospect of knowing in advance if your child will have a specific anosmia, then this "wrinkle cream" is for you.

Some other cultural evolution things, from sister blog Network Address:
Milk Does a Body
Cultural Evolution of Basic Color Terms

Posted by Self Replicate at 1:53 PM