The Smell of Mother Earth to a Planetary Refugee 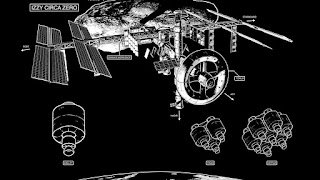 In order to survive in outer space, one needs to be protected, first and foremost, from the showers of radioactive particles that abound there. For this, the International Space Station in Neal Stephenson's novel bolts itself to an asteroid named Amalthea (seen here), to rest in its massive "cosmic shade."

This is a story about people who had to flee Earth, barely survived in a hastily-improvised expansion of the ISS, and thousands of years later, flourished long enough to terraform Earth back to its pre-catastrophe days. In a quick passage, he talks about the smell of the air. People have been living in space habitats for generations; they've never smelled air that wasn't recycled; they've never smelled air that wasn't on a planet. But now they're back on a newly terraformed Earth, doing some reconaissance...


"According to their measurements, the result was a nearly perfect reproduction of Old Earth's atmosphere. No one who breathed it after a lifetime spent in the habitats needed scientific data to back that up. Its smell penetrated to some ancient part of the brain, triggereing instincts that must go all the way back to hominid ancestors living on the shores of Africa millions of years ago. As she knew from traveling to Earth many times, it was a kind of intoxicant. It was the best drug in the universe. It made people want to be on Earth more than anyting. ..." (p656)

Post Script
I'm not trying to take away from the awesomeness of this idea, this passage or this story, but chances are that during this scene, the scent referred to is not one of Earth so much as the Ocean. (I think they're standing on the coast when this passage appears.) If that's the case, I should then direct the reader to another post about the smell of the ocean, the chemical Calone, and the Seinfeld episode that made it all memorable.

And if after that you still haven't had enough, check out this earlier post about the smell of rain, which is really the smell of earth (like dirt, not the entire planet).

Posted by Self Replicate at 2:36 PM