When Do Bad Smells Become Dangerous

You’re looking at a mountain of garbage in India which is slated to become higher than the Taj Mahal.

Before I say anything about bad smells in New Jersey, I should first link you to the absolutely most popular post on this blog, which provides an olfactory tour of the infamous New Jersey Turnpike.

Now onto more current matters. There's a landfill in New Jersey that's been causing problems for its neighboring residents. Actually, there's lots of landfills in NJ, and lots of them cause problems for nearby residents. (See an older post about Tinton Falls and the Smell Hotline.)

The town of Kearny sued the New Jersey Sports and Exposition Authority (NJSEA) last year over health concerns from too much hydrogen sulfide gas. The gas smells like rotten eggs and comes from decaying sheetrock (gypsum board) in the landfill. It was found at levels that exceed state health guidelines, so the town sued, and now the case has been settled: The resolution will permanently close the landfill, cap it, and transform it into a passive recreational space with public access to a nearby marsh.

I've brought this up as an opportunity to talk about smells vs health: Lots of things that smell are bad are also bad for us, but not always, and it's complicated.

Carbon monoxide is lethal and odorless. Isovaleric acid smells like rotten foot fungus and vomit, but it's not going to kill you. The source of the isovaleric acid, however, that might be a bacterial health concern. The "rotten eggs" emanating from your local landfill? Let's take a look at this chart, which I happen to have lying around. 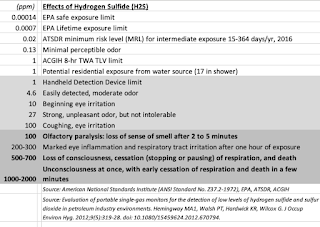 You can detect hydrogen sulfide (H2S) at 0.13 parts per million (ppm). At that level, you won't get immediate effects. But if you're exposed to that level every day, you may get health effects, which explains why the "EPA safe exposure limit" is decimal points lower than that.

But it gets better. At some point, once the H2S reachers 100 ppm, you can no longer smell it. Also around this point, at 500 ppm, it can knock you off your feet. A little higher, at 1,000 ppm, and you might never get back up.

The takeaway from this chart is only to say that you can't rely on smell alone to tell you whether something is safe or not.

Is a smelly landfill next to my house safe? Probably not; but probably not for the reasons of why it smells. Granted, if it's got that much sheetrock that it's pumping 0.13 ppm into the window of your bedroom, then it's a problem.

But don't forget that landfills pose other health concerns besides the gases they emit -- the effluence that slides its way out the bottom of a mountain of trash will be sure to have something of concern in it. Where does that go? Back into your drinking water? Does it wash ashore the floodprone playground where your kids play? Those pollutants you might not smell, but that doesn't make them any less of a problem.