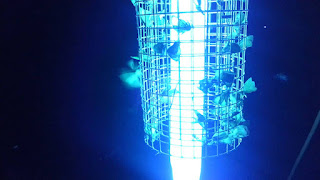 If you're not from the United States, you might not know about DEET. It's like a weapons-grade insect repellant, better than citronella (sorry to the naturopathic chemophobes out there). And if you're not from the U.S., you might not care about DEET, because you don't get mosquitos. As one living in the Northeast specifically, DEET is a household name (and sure, citronella plants abound in carefully defended backyards).

Since its widespread use in the 1940-50's, nobody has had a good idea of how it casts that magic spell. Does it smell really bad to mosquitos and actually repel them? Does it deactivate their smell receptors? Does it lower the rate of evaporation of our smelly sweat vapor, giving us a kind of odor-invisibility?

This is hard work you know. Mosquitos are pretty small, so getting inside their little brains is a bit difficult.

But scientists, man, they're smart. Instead of picking apart tiny insect brains, they use genetic engineering to tell how the bugs are being affected. To clarify, they're not using the DEET to genetically alter the bugs. Instead, they're making a genetic change to the mosquitos which makes it really easy for them to record their odor experience.

In fact, you may have already heard of this one -- fluorescent neurons. That's right, they genetically alter the mosquitos so that when/if their smell receptors activate in the presence of a human-sweat-odor-molecule, they literally light up.

And it turns out that the odor-masking theory is looking pretty good. I'm not sure how they do this, but they measured the actual amount of human odor molecules reaching the insect's antennae, and found way less after having sprayed the person first with DEET.

So DEET works, and this is why. And yes, citronellol works too, although its effect is not as potent.

And you know what is the absolute best mosquito-repellant, 100% effective? A fan. That's right. Next time you're sitting in your backyard, and the bug spray is wearing off, grab an oscillating fan and an extension cord. Problem solved, and no lingering smells afterwards.

Post Script
Citronella oil has been a registered insect repellant in the United States since 1948.

Post Post Script
General Mosquito was a brutal and feared leader in the Sierra Leone Civil War at the turn of the 21st century. He has his own wikipedia page. General Mosquito Killer, however, does not have his own page. He was even scarier than General Mosquito, as you might guess.