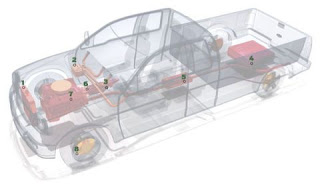 If anyone has been to New York Penn Station in the past year, particularly the New Jersey Transit portion, you've smelled the overwhelming maple syrup streaming through the space.

That's a coolant problem. Coolant, or the sweet-smelling ethylene glycol, is getting out of the loop it's supposed to stay inside of, and because it's hot (made so as it tries to cool a hot motor) it evaporates and heads for your nose holes. And most people will just think, hmmm, what is that.

Now you know. And if your car smells like maple syrup, same thing. Get your radiator checked out. Don't forget, however, that Sotolon is the molecule that makes this smell, and it can also be found in Fenugreek, a spice often used in Indian food. It can also be found at the end of a packed bowl, also known as the smell of a "cashed bowl."

I took the picture above from an article on the Popular Mechanics site where they go on to list a few more odor-clues to car problems. I'm keeping this as reminder for myself, as I just had to deal with a bad radiator.

Now since I'm not a mechanic, I'll let you go back to their site to see what to do about all this. In the meantime, don't forget to stop and smell the roses once in a while, it's a good way to catch problems before they get worse. (I have yet to mention the coolant problem to anyone at Penn Station.)

Posted by Self Replicate at 6:51 AM