Be a Bad Beer Expert

Another term synonymous with beer taint is staling compounds, or simply "off-flavors." Regardless, oxidization is the culprit. In fact, oxygen messes up lots of things, like apples, avocados, and even your body. (You know the old joke of how "Scumbag Oxygen" is required for you to live, yet kills you slowly.)

In beer, oxidization can happen for all kinds of reasons, from air trapped in the head space before putting the cap on, to how long it's been in the bottle, to the storage conditions.

The bottom line is, we want beer to taste good, so if you're making it, we want you to know how to recognize the bad stuff. That's where the test kits come in.

It seems like the concept isn't too old, starting maybe circa 1995 by a gentleman named Dr Bill Simpson working at the Brewing Research Foundation in England.

I'm getting all this at the AROXA site. They make flavor standards and sensory software for beverages. And for beer taints.

I'm taking the following lexicon from their beer taint kit. However, I'm adding some descriptions from a few things I found elsewhere; these extras are separated by a semicolon. And I'm doing this because sensory lexicons are great. This one doesn't have any common names (except for Geosmin), but we'll have something to say about that below.

2,4,6-tribromoanisole
"Musty, like corked wine with a rubbery overtone”

2,4,6-trichloroanisole
“Musty, like corked wine or a damp cellar”

trans-2-nonenal
"papery" at the threshold concentration, "cucumbery and green-malty" at twice that value, and "fatty and leathery" at three times the threshold value; I'm adding this although it's not on the AROXA list, because it shows how different concentrations affect perception.

acetoin
"moldy, earthy, tobacco-like;" and this one because it is an oxidized form of humulene.

AROXA has all kinds of flavor standards; I'm only copying the ones for bad beer.

FlavorActiv is another name I should mention, being that they declare themselves the global beverage industry standard for sensory needs since 1996, and have something to do with AROXA.

They make reference standards as well, and have a lexicon of 57 flavors. 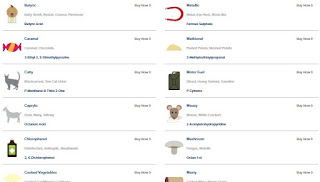 And finally, I have to add my favorite word found on this topic - Lightstruck! It's another word for "skunked."

*Let's not forget, however, that most of what we taste is smell. If it's not from the sweet-salty-bitter-etc profile, it's smell we're talking about. But we'll let this slide.

Post Script
Other important entities in the beverage industry:

Here's a book about all this:
Food Taints and Off-Flavours
MJ Saxby, 1996

(Yet I leave out all the wine stuff for another day!)

Posted by Self Replicate at 5:29 AM