Motherlode of All Microbiomes 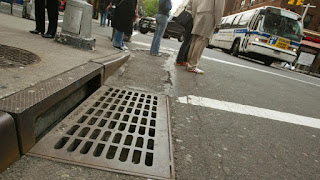 With microbiomes being the new big thing, it’s no surprise that a specimen of chunky sewer grease is now decomposing live for our viewing pleasure.

We have all heard of the fatbergs plaguing London. They’re an agglomeration of fat and baby wipes, congealed into a monster the size of an entire sewer drain (one was bigger than a 747). The first one to be discovered became an instant celebrity, and was subsequently added to the dictionary within a couple years. Presently, a small portion of it enjoys a place in the Museum of London where we can all watch it decompose into perpetuity.

This fatberg is only a small fragment of the kind found in London's underground (the other underground).


It’s pretty gross to have a lump of human feces and spit toothpaste placed on a pedestal in public view. Not only is it gross, but it’s a health hazard. The lump was quarantined for months. It grew mold, it hatched flies, and then it was contained in a triple-thick glass case and put on display.

Being gross and dangerous also makes it intriguing. After its debut, it became a sort of icon, the subject of plays and poems. Apparently there’s a fragrance artist on the loose making fatbergs representing different neighborhoods but I can’t find any further mention of this.

Needless to say, we can’t smell the thing. During the process, it was said to transform from its raw, unbridled state of pungent effluence to a milder olfactory incarnation as a damp basement. Anything more is left to our imaginations.

It now sits as part of the permanent collection; livestream from quarantine.

Here is the lab analysis report for the fatberg. They give a list of fatty acids, metals, and fecal indicators. Most of the sample was made of unsaturated fats from cooking oils. The report also gives you a rudimentary understanding about how fatbergs may accumulate (make sure to brush up on your Saponification lessons first).

Post Script:
Scopophilia or scoptophilia (from Ancient Greek: skopeo, "look to, examine"), is when we get pleasure from looking at something.

And of course it's evil twin, Scopophobia, the fear of being looked at.

Posted by Self Replicate at 2:56 PM