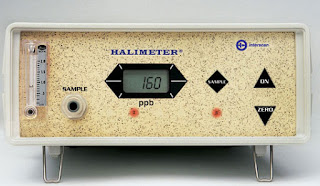 The Halimeter measures volatile sulfur compounds in the breath down to the parts per billion, and is used to identify the origin of one's bad breath.

It is a common factoid that body odors, particularly our breath, can be used to detect disease. Diabetes is a good example; it smells like acetone (nail polish), which is a result of the metabolism of excess ketones in the blood, which themselves are a result of the burning of fat instead of sugar, a solution the body uses when it has run out of sugar.

The holy grail of disease detection via the breath would be to identify cancer, and early enough that it can be stopped or reversed.

That's exactly what the Breath Biopsy study intends to develop. A large group of people will be chosen to breathe into a sampling vessel, from which their breath will then be sniffed, i.e., scanned for identifiable patterns, and saved for future reference.

Those people will be tracked into the future. For those who go on to develop cancer, their breath samples will be compared to those who did not develop the disease. The researchers are ultimately trying to find out how far in advance they can detect the cancer breath. This breathalyzer could then become a non-invasive way to identify the disease.

Post Script:
I will repeat again here a story I find fascinating in regards to identifying disease by smell. I certainly cannot tell you that it's true; it's only meant to enliven discussion:

Although it does not happen often, it does happen that large plots of land previously used as a burial ground must get moved. On one of these occasions, after many days of work, the gravediggers (or whatever is the opposite of a gravedigger) reported markedly different smells coming from the many areas of the cemetery. After looking into it, the different odor-areas could be correlated to disease epidemics in history. Dirt that had been home for a hundred years to those who died during the diphtheria outbreak smelled different than that for tuberculosis.
Posted by Self Replicate at 1:17 PM