The City with No Smells 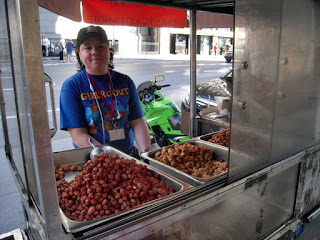 We all know that air pollution is a real threat, both to ourselves and our planet. And we all know that automobiles and electricity generated by fossil fuels are the major contributors to this pollution, and mostly because they are visible (except that they’re really not visible – the plumes you see exhausting from tailpipes and smokestacks tend to be water vapor; the polluting parts are invisibly microscopic.)

But there's another suspect out there which goes largely ignored, and as it would, because it's largely invisible to us.

We're not talking about cow farts, but cooking grease. To be more scientific, it is called organic aerosols, and it comes from the oils and organic matter that are heated in the process of cooking, and ejected out of the kitchen and into our urban environments.

As science starts to zero-in on atmospheric offenders, the local sources of pollution become more apparent. You will be way more exposed to the particulate matter exhausting from a tailpipe if you're driving right behind one, as opposed to watching it from your apartment window. But you are also more exposed to the organic aerosols exhausted from your local taqueria as you walk around your neighborhood, as compared to a pollution meter stationed on the roof of your 4-story apartment building.

Thing is, although organic aerosols may be invisible, they are smellable. And although there are plenty of examples of restaurants "polluting" our urban environment with rancid reminders of why Yelp is still in business, there are just as many examples of locale-defining odor profiles marking your travels about your home neighborhood, or your favorite tourist destination.

Popcorn at the movie theater* is an obvious example, but there are plenty more of these olfactory advertisements to enjoy, and which even help to define a neighborhood. It's interesting to think of a historic preservation society that adds to their list of cornices and cobblestones a particular plume that really defines a place – a specific combination of cultural cuisine that can only be found in that little nook where the Polish krautmakers and Indian currystirrers all live together.

That being said, it’s not hard to imagine a future where everything that smells is bad for you and hence ridden. A city with no smells. Very healthy, very uninspiring.

*I was recently informed by a friend that, to him, "popcorn smells like vomit," which does make sense IF the butter is rancid, because isovaleric acid is a primary constituent of rancid butter, and is the smell of vomit and fermented feet sweat.

Good smells aside, when you roast things like nuts, popcorn or coffee, some of the compounds released are called diacetyls, which can cause serious respiratory problems for workers exposed to it in high amount.
Image source – link

Posted by Self Replicate at 2:10 PM