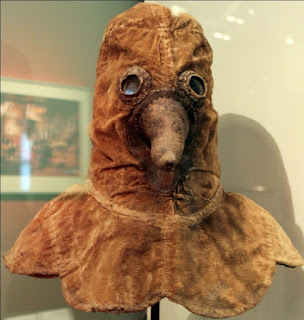 You’re looking at a 17th century plague mask. Doctors had to wear these as they went to visit the afflicted so they would not themselves be exposed. It was thought that bad smells and disease were the same thing. They weren’t totally wrong about that. Regardless, urban planning and public health came to us by way of smell. A great book to explore this relationship is Alain Courbin’s Foul and the Fragrant, about how the smell of poorly designed sewage system of 18th century Paris led to the French Revolution.

On a similar topic, I’m reading a great article about this major smell map that came out a while ago. They mention a lot of good stuff about urban planning, and one which I am very embarrassed about, because I don’t recall ever hearing this one:

In their Discussion section, where they discuss the limitations of their study, they write about contextual factors of the layout of the city and how it affects odor detection:
“The grid layout of New York City, for example, encourages large-scale collective odor experiences as it was designed in a way to facilitate airflow using prevailing westerly winds to dissipate the disease-carrying miasmas of the late 18th century.”

(I guess Manhattanhenge was just an afterthought??)

Image source: 17th century plague mask, from Wikimedia commons, and this place too.

Posted by Self Replicate at 1:40 PM