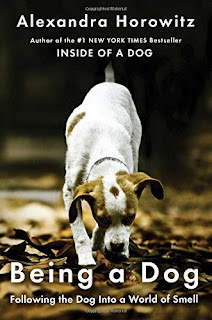 Alexandra Horowitz is a teacher of psychology, animal behavior, and canine cognition at Barnard College, Columbia University, in New York City. She is also author of Being a Dog: Following the Dog Into a World of Smell. Her book is as much about human olfactory cognition as it is about dogs, and her easily accessible narrative offers a heck of a lot of information about the sense we’re all missing.

The book was great, and I am definitely not looking the same at dogs, and their walkers, after reading it. I posted a bunch of notes here. Still, I was compelled to ask her if she might give some time to answer a few questions for the blog here, and what do you know, she found a moment on her summer break to get back to us.

***
AB: 1. The thing I am perhaps most fascinated with when it comes to smell is its ability to tell us things that are otherwise invisible, and at times these things can be very personal information about people.

I have heard from a friend of mine, who is really sensitive to smells, she's an eye doctor, and she says she can tell if one of her patients are cheating on their spouses (still awaiting the details of how the heck she knows that).

Do you find it uncomfortable at times to 'learn' something about someone that you shouldn't know?

AH: I don't know that I have the olfactory acuity of your doctor friend! I have definitely startled my students by knowing who had garlic with yesterday's dinner, or -- not so uncommon -- who's just had a cigarette. I think that they feel uncomfortable with someone having that knowledge, but I don't. Now, if I had a nose with the sensitivity of dogs' noses, maybe I would be gleaning information that I'd rather not have. But one can also simply not sniff....

(I would have to playfully disagree here, as I had to remind myself recently in a somewhat uncomfortable social situation – you can close your eyes, you can put the earbuds in your ears, but you can’t not smell, unless you want to not breathe.)

2. Is there any particular source you recommend for more information on astronauts and smell?

Look at the work that NASA has done to impart flavor to foods. (Also, if you run across an astronaut, ask him! That's what I did...)

(Well I guess I should ask an astronaut because all I get is this - For astronauts, there's little gravity, and this changes the pressure in your head and your sinuses, so that it's hard to breathe through your nose, which means you can't smell - and that means your food doesn't taste like anything. But that's only for the first few days; our bodies get used to it. So why does food continue to taste different? Scientists can't say for sure. For example, it could be that the confined space of the station, crowded with all the other smells of other bodies and machines etc., make a very noisy environment for our noses, and so the food is drowned out. And bland food means more spicy flavors, more Tabasco sauce.)

3. [This is a reference to Horowitz’ recounting of the trick where a person is asked to choose a book from a shelf, hold it and thumb through the pages, then put it back. The ‘magician’ then enters the room, and recovers the chosen book; “You just smell the books,” Feynman said.] Have you ever pulled the Feynman trick as part of an informal investigation in a public place?

No! Although now that you mention it, I will try it forthwith. I have pulled out le Nez du Vin - small bottles with odors present in wines - with many visitors, and we try to guess the smell source. It's fascinating, as inevitably there will be one person who is surprisingly good at naming the odors, while the rest of us grasp at straws.

(Besides Le Nez du Vin, there's also Le Nez du Cafe, and Le Nez du Whisky. And as I happen to be looking at the World Coffee Research Sensory Lexicon, I see that there are simple ways to make on your own samples - for a papery aroma, boil a coffee filter in water and smell the water; for a 'fermented' note, get some grass and let it ferment in a jar for two weeks. Still, it’s a lot easier to carry a bottle of essential oil in your bag than a jar of fermenting vegetables.)

4. And finally, will we ever have smelling robots?

There are lots of people who are banking on it. DoD and others have funded a lot of research on developing artificial noses -- so far without surpassing a dog nose. In fact, a lot of the fascinating detail I discovered about the airflow in a dog's nose came from a Penn State group that was looking to use that information in the design of an artificial nose.

Still, no one yet knows what combination of factors (in the nose and the brain, in anatomy and behavior) leads to macrosomatic animals being so good at smelling. We will have artificial noses, but they won't soon improve upon the many very good biological ones, I'd predict.

(Artificial noses are usually designed to detect specific odors, like explosives or drugs. So to call them artifical noses needs some explaining. It's like designing an eye that can only see bright green, and then calling it an artificial eye. Not to discredit the work of artificial noses, just disambiguation. If the program she is speaking of here is DARPA's RealNose, it has since been cancelled. There have been plenty of other attempts, and some successful, to make these "single-serving robot noses," but my favorite - remote control bomb sniffing locusts!)

***
And so there you have it. Smelling robots are far, far away. About as far as getting a good taylor ham egg and cheese sandwich in outer space.

Much thanks to Alexandra Horowitz for taking the time to give some food for thought, beyond the wealth of information that is already presented in her book.

For more material by Alexandra Horowitz, here’s a talk on NPR, and a video from the University of California TV.