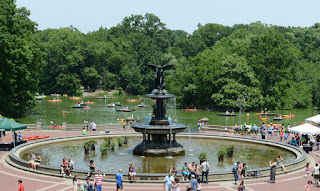 Thought I could shed some light on a trendy topic here:  water chemistry and baking success.

Everyone knows Brooklyn pizza is the best pizza, and that there is only one place in the world that makes bagels, and it’s New York City. (If you’ve ever had a bagel in Florida, you know what I’m talking about; unless it was literally baked in NY and shipped to FL, which isn’t uncommon.)

We heard recently the claims of a well-meaning group of entrepreneurs that NYC’s water is now available to the rest of the world. The company's claim: They will analyze your local tap water to calibrate a device that will tweak it to be just like New York City’s water.

What does the water taste like and why? Well, it tastes good, according to taste tests. And the reason is because New York City's water comes from natural reservoirs, highly protected from contamination. This allows the water to pick up minerals in the ground that it passes as it makes its way through the water cycle. Also, the ground it passes is low in calcium, which makes things taste bitter (not better, bitter).

Chances are, however, that taste is not the reason why NYC gets so much props for its water. Chances are it's the chemistry of baking, which is a complicated thing, except to say that it's the chemicals, stupid.

The chemicals themselves are thrown into the Maillard arena to break down and transform.  Pyrrolines and pyridines are some of the bread-smelling chemicals created in this culinary laboratory – the “pyro-“ parts of their names indicate their origin in fire.

I just named two chemicals, but baked goods emanate hundreds of chemicals, all dependent not only on the original chemicals present, but on the nature and extent of the heating reactions. Just like the analogy of the butterfly effect, initial conditions can have a drastic effect on results. In a process as complex as the heated Maillard reaction, a slight change in the initial ingredients can have wide-ranging effects on the bun in the oven.

Taste/smell isn’t the only thing that is subject to change here – texture is a big factor as well, and is affected just as much based on initial ingredients.

Post Script
In case you thought NYC had it all, Paris just put bubbly water in it's water fountains. We call that carbonated water.

Posted by Self Replicate at 9:16 AM