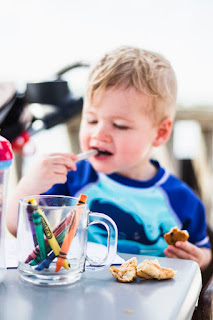 Childhood fame, it’s official – Play-Doh is the smell of a generation.

Now that the kids who spent their childhood mushing pink putty in their hands have become old enough to run the world, they’re changing the rules of intellectual property to protect their olfactory legacy.

Actually, says here Play-Doh has been around since 1956. But I am curious as to how many 60-year-olds today reminisce about the smell of Play-Doh? Feel free to comment on this. I asked a gentleman of about 50 but he’s from Germany. They had their own Play-Doh he says, and he didn’t recall its smell in the same way.

In the US, Play-Doh was a cultural phenomenon; is that what you would call it? For anyone who did not experience something I will call a standard American childhood, the colored putty probably just smells like putty.

To a trained fragrance designer who also did not experience the standard American childhood, it probably smells like “sweet, slightly musky, vanilla fragrance, with slight overtones of cherry, combined with the smell of a salted, wheat-based dough.” Because that’s what the trademark now says.

To that generation of US kids who played with it, it smells like childhood and fun.

So this is now a trademark, which I should assume is something like being protected under intellectual property or copyright law. This is a big deal then, because we can’t copyright fragrance. Fragrance and Fashion are two art forms that cannot be protected under the same laws that sent Pharrell into the courtroom over Robin Thicke’s Blurred Lines.

In fact, after a quick perusal, it looks like there’s only ten other scents in this category (and the UK only has two). The ironic loophole here for Play-Doh is that a product that serves only the purpose of its scent cannot be protected. Play-Doh is a toy, not a perfume or a candle or a cardboard cutout of an evergreen tree. (In the UK, it’s for rose-scented car tires.)

Verizon stores have their own scent trademarked. One that I really like is this company that makes engine lubricant, and it’s got three different aromas that make your car exhaust smell like a fruit basket (cherry, grape and strawberry to be specific). "Fuel Fragrances" by Manhattan Oil, check it out. I like this one because it leads me to my quick diversion – scented Crayola crayons. What the heck were they thinking? They should’ve taken a page out of Play-Doh’s book. The Doh smells good, but it’s not an edible scent. Sure, they say “cherry overtones” and vanilla, but everything smells like cherry and vanilla, right? It’s just not the same as labeling a brown crayon “Chocolate” and then making it smell like chocolate.

In conclusion, and despite the excitement of this news, I am compelled to express my regret on this one issue: Using words to talk about smells is a joke. I understand that laws are made of words, and so that’s all we have, but this – doesn’t mean much in the world of smells.

I would much rather see it as “the smell of childhood and fun.” But I guess that’s too vague. (“Sweet, slightly musky, vanilla fragrance, with slight overtones of cherry, combined with the smell of a salted, wheat-based dough.”)

Notes
The subject of intellectual property comes up a bit here, so I added some links for your interest:
Secrets of Flavor
Firmenich and the Ecstasy of Saint Theresa
What Exit - The Smells of the New Jersey Turnpike
I Could Have Been a Fragrance Millionaire Jerry

Post Script
Play-Doh and used Play-Doh do not smell the same. Because it’s sticky, and kids can be gross, and together, that makes Play-Doh, potentially the grossest smelliest thing ever. Kids pat it down on peanut butter and paint-covered surfaces, then on the ground, then on their foreheads… Then they take that entire surface area and squish it upon itself, putting all those microbes that were on the outside, now on the inside, and making more, new outside that can now stick to new microbes, which will be squished back into itself again, and again. It might be the greatest recipe for a germ-bomb ever. Then again, according to this seemingly disruptive news about Leukemia and germs, that might not be a bad thing. Maybe Hasbro has another patent brewing as we speak.

Posted by Self Replicate at 1:34 PM