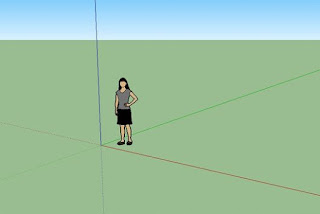 Because of its key role in navigation, odor-detection and spatialization go hand-in-hand. A paper from McGill's Department of Psychiatry and the Douglas Mental Health University Institute gives evidence to support this relationship.

The hippocampus, which is the central location where spatial memories are "stored," is a key part of the olfactory system. The two – space and smell – are so closely related that they can become difficult to disentangle.

There is a great philosophical essay about the ontogeny of a salamander (see Hosek and Freeman below) in which a creature develops its identity (if questionably-sentient creatures can be said to do so) by way of olfaction. This creature, as with many others, interfaces its environment primarily by smell, especially in the beginnings of its life. The decisions that it makes then are in response to olfactory information, which through iterated reinforcement forms the foundation of its self.

I was so impressed by this idea that I was compelled to write a short essay myself about space, information and dimensionality, as narrated via the odyssey of the Eukaryote evolving through the epochs to its present-day instantiation as a self-aware human. It can be read here.

***
On this relationship between navigation and olfaction, I am reminded of a comment I received more than once when I was first telling folks about my book on smells – "What is it about architects and smells?" I studied both architecture and olfaction, and apparently, I'm not the only one.

That was something I couldn't answer at the time; I had never heard about it. As I began to meet more people involved in an olfactory occupation, be it writing about fragrance or designing olfactory experiences, I did notice a few interdisciplinary architects scattered among them.

Now it occurs to me quite clearly – architects are not experts at navigation so much as spatial perception in general, and specifically on moving through space. Whereas the painter is concerned with the way the eyes move through two dimensions, and the sculptor thinks about eyes moving in 3-D, the architect is concerned with the moving body.

The late architect Michael Graves made this the thrust of his speech as he opened his own School of Public Architecture at New Jersey's Kean University in 2015(ish?) – he told us that in designing a building, the human scale is the only one that matters. The way we feel in a space is the primary criterion when evaluating it. If you think about it, a building is like a body for our body.

***
Architects don’t have to learn much about proprioception, but maybe they should. Proprioception is the feeling that we have of our own bodies, where the parts are, how they're related, what they're doing, and whether we should move them out of the way of danger. (Anybody ever see the hand-smashing phantom limb trick? This is a good example of the power of proprioception.)

As we move through a building, our proprioception recognizes and records not only our own bodies, but the “bigger body” that we're in, whether it’s a building or a backyard. Before there was such a thing as architects or buildings (i.e., before we were human), we used olfaction as a way to calibrate our proprioception, and to navigate this bigger body that we’re in.

It seems I’ve done a pretty good job of navigating myself into the part of this post that I now have no idea how to get out, so I’ll have to leave it there. Architecture and olfaction make a good pair.

Notes:
Good spatial memory? You're likely to be good at identifying smells too
Oct 2018, phys.org

Hosek R J & Freeman W J (2001). Osmetic Ontogenesis, or Olfaction Becomes You: The Neurodynamic, Intentional Self and Its Affinities with the Foucaultian/Butlerian Subject. Configurations 9: 509–541.

Posted by Self Replicate at 1:32 PM