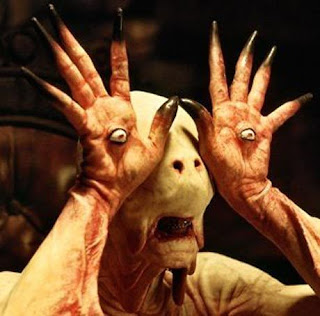 Diving off the deep end, I had an olfactory moment the other night that was a bit amazing, a bit scary. Amazing because I may have unlocked a new dimension of olfactory experience for myself, scary because I might be detecting the first real glimpse of neurological dysfunction that awaits my aged, exasperated mind.

Smells are like that. There are moments when I catch a whiff that is so faint, and so impossible to detect (like the mold that grows on the metal of your umbrella), that I often have to consider the myriad olfactory hallucinations that beset our chemosensitive organ, of which there are many.

It was a hot summer night. The crazy smell experiences always start out like that. Odors love heat, because evaporation is what makes them mobile; heat is the odor motor, if you will.

On this hot, sweaty night, I was eating dinner, hot and sweaty, resting my arms on my high-topped table, when I became fussed over the cleanliness of the surface of my table. My resting forearms sheathed in a thin film of slightly sticky, waxy sebum, and my tabletop layered in a similar compound from previous nights of the same scenario. "I need to clean this damn table. It's gross."

I try to keep my arms off the table. But it's a high top, and it's more comfortable for me to hunch over my bowl of gruel, resting on the underside of my forearms. I keep losing the battle, touching my sticky gross arms to the sticky gross table, then remembering not to, sitting straight up, only to capitulate again moments later.

All the while, I'm sampling my dinner, and very thoughtfully. I tried a new recipe last night, and today are the leftovers. The leftovers always taste different, and for some things, even better. The lemon juice in the marinade, the Maillard on the cast iron; What happened there? I used soy sauce and lime last time. What's the difference now? The acid, more sour; The surface texture, less caramelized. I am thinking, but with my mouth, my nose, lost in gustatory, olfactory thought. Shit! Dirty sticky table! And then it happened. Mid-bite, mid-thought, I could smell the table with my forearm.

That's right, mid-bite, the sensations of my dinner coalesced with the sensations of my forearms, and all of the sudden I could taste the table. Not even sure how to describe the taste, it didn't last long enough. My friend who knows a bit about these things says it's synaesthesia, hallucination. I'm not sure. I don't recall ever reading or hearing about this, but the science of smell is more mystery than science.

Our skin is covered in sensory receptors. Our olfactory cortex is entwined with our immune system. There is a hell of a lot going on here. I'm convinced that the reason I can smell mold in ways nobody else seems to be able to is because I trained (inadvertently through paranoia) my immune system in concert with my olfactory system to recognize it, and after a severe and prolonged exposure event in a basement apartment. The two -- immune and olfactory system -- now work together to alert me to its presence in the most impossibly minute airborne concentrations.

And now, I am suspicious that it goes way deeper. Then again, as I said at the outset, I may be slowly and steadily rolling into cognitive decline, my neural tendrils twisting, knotting, brittle and breaking. At least I'm taking notes.

Notes:
Pattern recognition receptor (PRR)
A receptor present on the surface of keratinocytes and other cells of the innate immune system that recognizes microbe-specific molecules that are recognized by a given PRR are called pathogen-associated molecular patterns (PAMPs) and include fungal glucans...They are also called primitive pattern recognition receptors because they evolved before other parts of the immune system, particularly before adaptive immunity...The innate immune system is an older evolutionary defense strategy, relatively speaking, and it is the dominant immune system response found in plants, fungi, insects, and primitive multicellular organisms.

Posted by Self Replicate at 3:41 AM