On Carbon Footprints and Cognitive Decline 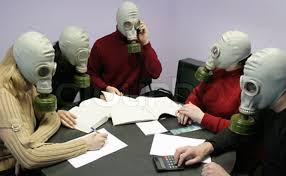 We didn't always spend most of our time indoors. Some of us still don't. From a global perspective, most of us still don't. But for most of those living in the developed world, more time is spent indoors than out. Human-body-pollution is not a problem outside, where it is maximally distributed. Indoors, anything that is generated will accumulate, and unless it is exhausted abundantly, it can have adverse health effects. Even our own breath can fill the air until it reaches concentrations that actually have effects on cognition (according to this pretty good study, at least.)

I never thought of myself as a smokestack, as an incinerator burning garbage and belching toxins. But then I read a book called The Metabolism of the Anthroposphere, where I learned that half of all the matter we ingest will then leave our bodies not as solid waste and not as liquid waste. Half of everything we eat, by weight, is exhaled as carbon dioxide, and as the by-product of energy production. We burn food for energy, and emit the by-products like a tailpipe.

Cows release carbon dioxide when they breathe too, because they are also burning food to fuel their bodies. And just like coal power plants, except that their bodies are the infrastructure of our anthroposphere.

These emissions may be bad for the planet, but when humans do it, it's only a problem indoors. This hasn't been known as a problem until recently. Coincidentally, it's also a problem that has been getting worse. Then again, some of us might argue that the effect, reduced executive decision-making proficiency, is not a problem at all(!).

***
The history of fresh air vs human offgas may traverse a few threads. Sure, to this day people live in overcrowded and underventilated conditions. Sure squared, too many of us are exposed to pollutants that are magnitudes more harmful than CO2, and not just to our cognitive function but to organs and critical systems.

This is a first world problem. And that the very few of us on the planet of a swelling 7 billion can worry about lowering their high-level executive decision-making abilities, means there are a few less of us worrying about dying at 30 years old due to excessive inhalation of machine-generated combustion by-products indoors, for example.

That being said, we have made progress in limiting harmful exposures in the workplace and in the home. But we have neglected ourselves as a point source of pollution. And baked into our building practices from 1970 to 1990 (roughly) are energy efficient strategies that are really good at making sure we stay cooped up in a pool of our own breath.

So to recap, once we get rid of all the really harmful pollutants in the workplace – respirable particles, inert mineral fibers, toxic chemical vapors, biologically-active dust – we then start to consider the relatively invisible threat of carbon dioxide.

And why should we care; is it really a threat to human health? Maybe not. But it is a threat to our mental health. Being in a room that is poorly ventilated so that it contains double the amount of CO2 found outdoors (and generated by the exhaling human occupants) makes you a bit less sharp (actually a lot less sharp, see more details below). Double that even more, and people get even less sharp.

Trying to prove that anybody was ever killed by being less sharp is like trying to implicate climate change in a single heat wave. But there are some people who care about this – those whose job it is to provide facilities designed for people to think. Not to build cars or computer parts or to make perfumes, but to think. Classrooms are thought chambers. What is the most important thing people are doing in that space? Thinking.

Executive conference rooms are thought chambers. The small amount of people in that one room could be making decisions worth a lot of money. What if they could think 30% better, whatever the heck that means.

How about we should all want to think better. We should all want as much fresh air as possible indoors at all times. That doesn't come without a cost. You have to heat that outside air, or cool it, or take the water out of it, or put it back in, and filter and circulate. That all costs money, especially the heating and cooling.

It may take a while for us to reach the point where we can begin to care about these things, but this is the logical next step.

Progress will march on, and as more and more of the world spends their time indoors, (and cleans up their act so they are no longer worried about physically harmful pollutants), then more and more will be looking for the next improvement in their environment. And this is final frontier, removing our own carbon dioxide from the equation.

*Body odor is not known to be a health hazard, although the WELL Certification regimen, for assessing the health and wellness of the insides of a building, includes criteria for "Olfactory Comfort;" Designers can obtain credits for providing abundant exhaust/fresh air, or for controlling and limiting the migration of odors, problems that occur to the human occupancy of interior spaces.

**It should be noted that this study, and those like it, do not tell us how carbon dioxide negatively affects our cognition, just that it does, or at least it did on the tests they administered.

Squalene, which is the greasy, grimous protective substance that once accumulated on your skin, interacts with ozone to produce secondary pollutants.

Notes
Is Conference Room Air Making You Dumber?
By Veronique Greenwood, The New York Times, May 6, 2019

We simulated indoor environmental quality (IEQ) conditions in “Green” and “Conventional” buildings and evaluated the impacts on an objective measure of human performance: higher-order cognitive function.

There is compelling evidence, from both cross‐sectional and intervention studies, of an association of increased student performance with increased ventilation rates.

The net annual costs, ranging from a few dollars to about 10 dollars per person, are less than 0.1% of typical public spending on elementary and secondary education in the United States.

Posted by Self Replicate at 7:26 AM