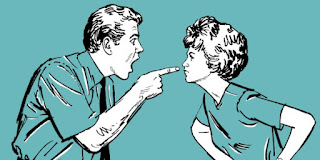 No, you don't have to eat your broccoli.

In an experiment that sounds like something we should have done like 70 years ago, we discover that all noses are not created equal. We all smell things differently, perceiving particular odor-features with varying levels of intensity.

I take it back; we didn't have the ability to do this kind of genetics testing 70 years ago. This new experiment showed that of the ~400 genes that control our ~400 different olfactory receptors, the variability is on high. In other words, let's say broccoli has a bunch of different chemicals that make it smell like "broccoli," and that there's a bunch of different receptor-genes that code for those chemicals -- you and I have slightly different versions of those receptors, which make one of us more sensitive to the bad parts of the smell, and maybe even the other of us more sensitive to the good parts.

What you get is one person who doesn't mind eating broccoli, and one of us who gets less ice cream after dinner everytime broccoli's on the menu.

What you also get is an entire sense which lacks in consensus. At the genetic level, what smells good to you won't necessarily smell good to me. So how do we agree?

As groundbreaking a breakthrough as this is, it doesn't even begin to scratch the surface as to how different each of our olfactory experiences are. Each one of us really does live an olfactory world all to ourselves.

We know then that genetics separates us, but it goes even further. Genetics is the hardwiring, but what about the softwiring? If you, for example, were force-fed broccoli while at the same time you're also forced to watch, with your eyes pried open, footage of people trying to peel the foil off a Nutella jar but it rips halfway through, then you might become traumatized by the smell of hot broccoli, and hence highly sensitive, and highly averse to it.

And the reverse can also happen. Don't like Flowerbomb? Wait until you have a few too many romantic encounters with a woman who wears it, and you'll change, you'll see.  That's softwiring. Humans are special because of our neural plasticity, so you can bet we're susceptible to these kinds of changes.

The final note here needs to be on the way we talk about smells. If we all smell a bit different, then how can we really communicate our experiences to each other with any fidelity?

You Will Never Smell My World the Way I Do
Heather Murphy for the New York Times, May 2019
Posted by Self Replicate at 11:11 AM