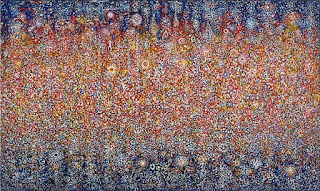 Looking at people's brains has been getting easier every day. And that's why we now know that there's people out there who can smell perfectly fine without having and olfactory bulb, because brains do whatever they want.

Not that crazy of an idea, considering the tongue-eyeball prosthesis, where electrodes on your tongue take wirelessly the signals sent by your partially-working retina, so they can be sent to a processing center that still works, that being the taste-center; you're hijacking your tastebuds to be able to see. After a while your brain is able to make sense out of the patterns of electricity sent to your tongue from your open eyeballs. You're not exactly tasting light anymore, but seeing it.

As for smells, same thing apparently. No bulb? No problem, the receptors still work, and we can just bypass the non-functioning area. That's called plasticity, and the brain has a lot of it.

(But in this case, it only works for left-handed women. This isn't too much of a surprise; if there were any population to have this ability, it would be women since they are better at smelling things, and because left-handed people are biasing their right-brain, which has a larger role in olfactory processing. Then again, who knows why.)

Post Script:
We're doing a slightly deeper dive into this, taking this passage from a science weblog:

The researchers then wanted to explore how the world smells to these individuals. They asked the three volunteers and 140 women of similar age to smell 10 odorants and use visual analogue scales to rate each odor by 11 descriptors. This generated enough data points to create an olfactory perceptual fingerprint that visually and numerically represents how each person perceives scents. The olfactory perceptual fingerprints of the two women who could smell without apparent olfactory bulbs fell within the norm of the study. Yet, the two women were unusually similar to each other in their smell perceptions, ranking closer than 96 percent of any other two participants.

Two things to highlight here – first, the study they used to get the "olfactory perceptual fingerprint" can be found here:

Personally I think this study is even more interesting because it suggests that we can ultimately do genetic testing on people just by getting them to smell some things. Our olfactory receptors take up a huge part of our genome, almost 2%, which is a lot for a sensory system. If we can identify an olfactory fingerprint, then we've already got 2% of your genome, and with nothing more than ten bottles of essential oil, and a pen and paper.

Next point; if we each have a unique olfactory fingerprint, and yet it's also a really rare thing to be able to smell without having an olfactory bulb, then you could bet that the people who share that rare thing also have similar fingerprints.

There's more to be read here about how we choose mates, based on immune system compatibility, and mediated by olfaction. But the bottom line is that in the coming bioware tech revolution, olfaction is a model information system.

The Human Connectome Project
Navigate the brain in a way that was never before possible; fly through major brain pathways, compare essential circuits, zoom into a region to explore the cells that comprise it, and the functions that depend on it.

The Human Connectome Project aims to provide an unparalleled compilation of neural data, an interface to graphically navigate this data and the opportunity to achieve never before realized conclusions about the living human brain.

Posted by Self Replicate at 9:30 AM