Did You Smell That No I Didn't 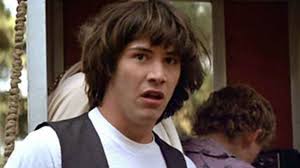 I would like to go back to Conspiracy Keanu on this one, because I know you feel the same way.

It's pretty hard to tell if the Blue you see is the same Blue I see. (And The Dress is still fresh enough in our collective memory to know how this plays out.)

For the most part, we can be sure that when we're detecting energy in the 610-670 THz range, it will be called Blue by anyone who knows what Blue means (which is not everyone; check this out for a lesson on the cultural evolution of color terms).

Smells however, not the same. Isovaleric Acid is the best example of this, because half the people who smell it will call it delicious and the other half disgusting. So we have differences in opinion, big deal. But there's more – we are not perceiving the same thing.

That is to say, the hundreds of chemically-sensitive receptors in our nose, which are programmed by hundreds of genes in our personal genome, they're pretty personal. And they can be quite different from person to person, with as high as a 30% variation. This means the actual receptors encoding molecular features into our minds are not all the same. This isn't just about subjectivity; the actual hardware is different from person to person.

General olfactory acuity will change based on age, gender, smoking habits, body type, and race. Other factors such as prior upper respiratory infection, trauma, and environmental toxin exposure are also involved. Even something as simple as prior exposure to an odor can change the way we perceive it (in the case of androstenone). Not only that, the same odor will smell different to the same person at different times!

With all that variation, how do we ever really know what each other is talking about? My androstenone is not your androstenone. A great study from a powerhouse in olfactory research was done back in 2012 to characterize these perceptual differences across a diverse metropolitan population, and I'm summarizing it here because without it, all other smell research is kind of useless.

The Study
They gave 66 different odors to 391 people who closely reflected the diverse population of New York City (meaning that this study group has a fighting chance of representing the diversity of the human genome).

On Hedonics, i.e., Pleasant vs Unpleasant
·      Unpleasant odours were generally perceived to be more intense than pleasant odours
·      Across all subjects, the eight most pleasant odours were food odours such as vanilla, citrus, minty, and cinnamon odours
·      The seven least pleasant odours were fatty acid derivatives associated with the sour smell of rancid butter or body odour
·      The biggest variability in pleasantness perception was found for floral odours
·      The two most pleasant stimuli were the two concentrations of ethyl vanillin, followed by the high concentration of vanillin
·      The least liked odor was isovaleric acid (rancid butter) and isobutyraldehyde (sour)
·      Throughout our subject population, odours perceived to be most and least pleasant were remarkably stable
·      For 18 of the 134 stimuli the pleasantness rating differed significantly between African-American and Caucasian subjects
·      The biggest difference between younger and older subjects was that older subjects perceived anise, the odour of liquorice, to be more pleasant
*I thought this one was easy, since I know that most candy experience by someone born in ~1930 came from licorice, and that changes pretty drastically thereafter; the first Twizzler flavor was licorice, not strawberry, which didn't appear until the late 1970's.
·      Men vs Women: there are older studies that show differences, but these were not reproduced in this study, instead, new sets: For guaiacol, the odour of wood smoke, both concentrations were perceived to be significantly more pleasant by men. The high concentration of guaiacol showed the largest difference between men and women
·      All the odours that were perceived to be more pleasant by perfume users were odours used in perfumes (pentadecalactone, heptyl acetate, octyl aldehyde, nonyl aldehyde); Perfume use may result in these odours being rated as more pleasant, or, alternatively, those who perceive these odours to be more pleasant are more likely to use perfumes.
·      Geranyl acetate (floral, rose, lavender) was perceived to be more pleasant by Caucasians than by Asians
·      Androstenone was more likely to smell “musky” and “aromatic” to women, whereas men found it to be more “chemical” and “sickening,”

Further Findings
Interestingly, for any given stimulus, the responses were as similar when the ratings were spaced over one year apart as when they were around 30 minutes apart.

This may seem surprising, but for thresholds it has even been reported that the variability within a day is significantly larger than the variability between days [1]. Day-to-day variability in olfactory perception is therefore largely a consequence of sniff-to-sniff variability.

Demography
·      Males have been shown to be more sensitive to the odour bourgeonal (lily-of-the-valley); also the only known odour that men are more sensitive to than women.
Olsson P, Laska M. Human male superiority in olfactory sensitivity to the sperm attractant odorant bourgeonal. Chem Senses. 2010;35:427–432. doi: 10.1093/chemse/bjq030.
·      African-Americans have been shown to have a higher threshold for isovaleric acid than Caucasians, but a lower threshold for pentadecalactone.
Whissell-Buechy D, Amoore JE. Odour-blindness to musk: simple recessive inheritance. Nature. 1973;242:271–273. doi: 10.1038/242271a0.
·      Asians perceive each odour of the homologous series of nonyl aldehyde, decyl aldehyde, and undecanal to be stronger than Caucasians (no mechanistic explanation for this).
·      The three stimuli showing the greatest variability between subjects in intensity ratings were the high concentrations of androstenone and androstadienone, and methanethiol (cabbage-like odour present in urine of people who have previously ingested asparagus).

Notes
Any two individuals differ by ∼30% of their olfactory receptor subtype genome:

Posted by Self Replicate at 2:47 PM