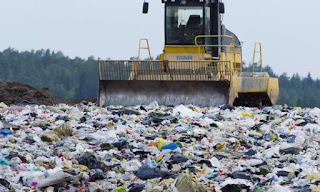 A landfill in New Jersey has been making the local news lately. A perfect storm, literally, is amplifying the stench of its waste emissions, and nearby residents are fuming. Not only is the landfill leachate affected by exceptionally wet weather, but that's where it begins. The extra water acts as a vehicle to bring more garbage goop to the surface than usual, but it also inhibits the fill's methane-capture system. In order to fix these problems, over ten acres of previously-covered garbage had to be uncovered.

Counter to common sense, garbage gets even hotter as it sits there. Microbes break it down, and their "work" produces tons of heat. Uncovering a dump of refuse that's already been rotting is a great was to fill any town with a powerful stench.

Combine all this with the right wind pattern, and you've got a landfill that actually smells like a landfill.

***
Usually, landfills do a pretty good job of smelling like nothing. First, the fill must be chosen or placed in the right spot relative to the interested parties who inhabit the nearby land. Upwind and upstream is the key. Winds don't blow from one direction only, and at certain times of year they can change direction entirely. Water always flows downhill, but the course it takes to get there could change over time depending on the intensity of rain events and changes to the surrounding land, and this could affect fugitive sludge leakage.

Next, there's the bright idea to cap landfills as they go, so their hot gas attack can't launch freely into the surrounding airspace. The gas must escape somehow, so vents are placed around the dump to control these emissions.

That's where the real tech comes in -- the odor control industry. A product called Neutralene, provided by Air Care Technology, is emitted from a vaporization pole. I'm having a hard time telling from their site how it works, but it's one of these two techniques: their product either pairs with the malodors thereby camouflaging them into a less-offensive smell, or it slows down the fugitive offenders by emitting special molecules that attract and combine with the offending molecules, thereby making them heavier, so they fall to the ground before leaving the vicinity of the landfill.

There are other alternatives to maintaining a garbage dump. We could burn it, using the heat produced for power generation. We could compost it, using the by-product to fertilize farmland. (We could even recycle…). But even these solutions can’t keep up with demand. We will have landfills for a long time, if not forever. And as long as we have landfills, we will have the smell of landfills.

What Exit - The Smells of the New Jersey Turnpike
Limbic Signal, 2016
Posted by Self Replicate at 11:39 AM