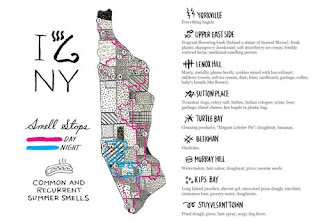 Must be something in the air. Over the past few years, many artists/scientists have been making smell maps of their cities. Victoria Henshaw is the most popular, with her “smellwalks” and her book Urban Smellscapes. But there’s others, like Kate McLean’s Sensory Maps, and Jason Logan’s handscrawled Scents and the City (seen above).

I think it’s just that maps are becoming a big deal. Something about big data, social media, and GIS interface. Maybe that Snapchat debacle too. The smell map we’re looking at today wraps up all three of these, and makes a very ambitious project into a neat interactive plaything. I wasn’t satisfied with the map, however, and was way more interested in the Urban Smell Dictionary they created in order to make their map I the first place. I was suspicious, so I went through their full report.

First they conducted smellwalks in each of the cities to be mapped (London and Barcelona), and along with some previous literature on the subject, they used the words generated on these smellwalks to support their lexicon. Then they collected geo-referenced picture tags from Flickr (530K), Instagram (35K), and Twitter (113K). Those tags and tweets were matched with the words in the smell dictionary, and voila!

The lexicon, in detail:

First they did some co-occurrence modeling, so that smell-words that appear in the same post/tweet are related. Then they used network analysis software, also called a community structure detection algorithm. InfoMap is the one they used, but they did further partitioning with another program. 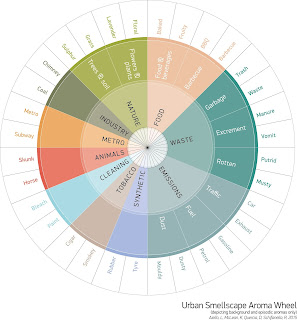 Post Script:
There was a really cool observation made during their report which I’d like to explain here. In the remarks they make about “base notes,” there's some good entropy data in there somewhere, about smells, awareness, and the amount of time you spend in a place/some measure of odor-attenuation.

“When a new perfume is created, different top, middle, and base note ingredients are combined to make the new fragrance. Those notes differ in terms of their tenacity. Top notes are those perceived immediately (e.g., citrus fruits, aromatic herbs) and, since they are intense, they are also volatile and evaporate quickly. By contrast, base notes are those adding depth and stay on the skin for hours (e.g., wood, moss, amber, and vanilla). Middle notes sit somewhere in between (e.g., flowers, spices, berries).”

Now they explain the urban smellscape:

“Base notes. The macro-level base notes for the urban smellscape are those that are likely smelled by a city’s first-timer visitors. That is because known odors are unconsciously processed by people, while only unfamiliar or strong odors are brought to people’s attention (as potential threats or sources of pleasure). As a result, residents are not likely to pay attention to their city’s base notes, while visitors would be able to consciously process them.

“Mid-level notes. As one moves through the city, the base notes blend with dominant smells that are localized in specific areas (e.g., factories, fish markets).

“High notes. Finally, the micro-level high notes are shortlived odors (e.g., goods from a leather shop). These are emitted in points that are very localized in space and time. … High notes are likely to go undetected because of data sparsity and because of our spatial unit of analysis being a street segment.”

And one more thing, I’m like how do you say this and not cite it??

“Air pollutants also have been found to reduce the ability of floral scent trails to travel through air.”


-I’ve never heard this, and they provide no citation
Posted by Self Replicate at 1:29 PM