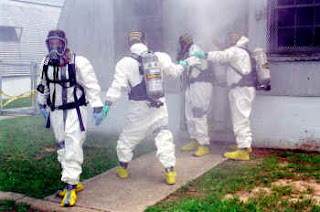 It's poison ivy season. I have it right now, just a little bit. When I get a lot, I can smell it, not the plant, but I smell it coming out of my skin, usually a day or so after I've been dosed, but before the itching starts to come out. At times, it's the smell that alerts me, and that I should stop itching; itching always seems to make it worse.

I should probably know this already, but I decided today to look it up - what does poison ivy metabolize to while in the body? In other words, what am I smelling.

First, poison ivy has within it a thing called urushiol. It's a sap running through the veins of the plant, and anything that disturbs the plant will release this stuff as microdroplets onto whatever surface it touches. A walking animal, a biting insect, a gust of wind, your dog, a soccer ball rolling on the ground, your lawn mower, or my favorite, a chainsaw ripping through a down sycamore with a hidden 3 inch vine of poison ivy growing on it, in October, can send the stuff wafting in the air as you ride your bike past its cloud of crystalized urushiol that then gets unwittingly lodged in your beard. (By the time I discovered what happened, days later, it was way too late to shave.) That's an extreme event; it usually happens in summer, unless you're doing some thorough spring cleaning, and it usually doesn't 'waft through the air,' unless it's been projected by a chainsaw.

So urushiol gets on your skin, then it gets absorbed into the outer layer of your skin, as all oils do. But then, something else happens to the oil. It enters the blood, and your body breaks it down into some other chemical that is seen as an invader, and your body starts to fight it, leaving you with the collateral damage, that being your red, itchy, peeling, maybe scabbing skin.*

But this is the part where it smells. The body breaks down urushiol into quinones, and the quinone chemicals give you the reaction. The quinones also give you that smell. I look for urushiol metabolites, find quinone, or 1,4-Benzoquinone to be specific, and look for odor properties.

Wow, that's it. That's what poison ivy smells like when it comes out of your body. See if you can pick it out this season, a day or so after that camping trip, but before the histamine hijacking begins.


*The poison ivy reaction will only appear where the oil originally touched you. Even though it has to get into your blood to become active, the activated metabolites do not travel around the body and show up in other places at random. Instead, they stay where they contacted you initially. This process, where the urushiol is converted into reactive quinone, happens at different rates on different parts of the body, because the thickness of our skin varies. The palms of your hands will never get poison ivy because they're too thick. The skin on your face, however, is very sensitive, and if your whole body got covered in one day, your face would probably get it first, and your forearms would get it maybe two days later, making it seem like it's spreading around in your blood, but it's not.

Urushiol on Toxnet, the US Hazardous Substance Database:
https://toxnet.nlm.nih.gov/cgi-bin/sis/search/a?dbs+hsdb:@term+@DOCNO+7485

Some good random facts from the internet:

Posted by Self Replicate at 1:52 PM