On Odors and Air Quality 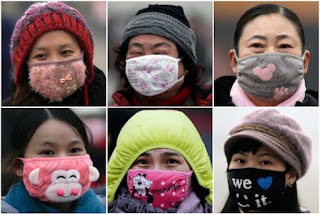 Forget Beijing, walk down the street in New York City and you will see people wearing facemasks like it’s cool. Actually, it is kind of cool, but it is really sad when you think about it. It’s also pretty sad because these facemasks will do mostly nothing to help your exposure to air pollution. What you really want is a NIOSH-Approved N95 Particulate Filtering Facepiece Respirators.

Air quality should be a big deal at this time of year. Not sure where you’re reading this from, but here in New Jersey, or perhaps the greater Northeast, summer brings with it daily air quality alerts. This is where you can’t breathe too much during the hours of 11am and 11pm. Mostly these alerts have to do with ozone, which is good when it’s up in the air blocking UV rays, but not so good when it's at ground level being inhaled by you.

There are plenty of other pollutants in our air, and those living in a metropolitan area should know about these things. As will be repeated below, air pollution is the world’s largest single environmental health risk.

While I was reading a great article about a massive data-fueled smell map, I came across this passage, and figured it’s good enough on its own to put here, because it makes a really important distinction between odor and air pollution.

From the article “Smelly Maps: The Digital Life of Urban Smellscapes,” in their methodology section, about the air quality of streets and how it effects their data:

“The olfactory experience of a city is inevitably influenced also by the quality of the air, measured by the amount of pollutants that are emitted in the atmosphere by several human activities. It is useful to clarify the differences between air pollutants and odors. Air pollutants are chemicals that, when released into the air, pose potential harm to human and environmental health. These chemicals may or may not be detected through the human senses (McGinley, Mahin, and Pope 2000). Some air pollutants have odors (e.g., benzene has a sickly sweet odor) while others, such as carbon monoxide, cannot be detected through the senses of smell. Air pollution is the world’s largest single environmental health risk, being the cause of one in eight of the total premature global deaths, according to the World’s Health Organization.” http://www.who.int/mediacentre/news/releases/2014/air-pollution/en/

This goes on to list the handful of pollutants that are measured in cities: carbon monoxide, nitrogen oxides, ozone, particulate matter at both 10 and 2.5 micrograms, and sulfur dioxide.

Later, in another section, the authors mention this, which gives us an inkling that odor detection and air pollution detection could become good friends:

One way to detect an area where local, point-source air pollution might be a problem is to look for areas with less nature. The authors of this study found that many odors were complementary, so that odors of “nature” were not found near odors of “emissions” (i.e., pollution)

Before closing I should mention that odors as co-pollutants can indicate pollution levels high enough to cause averse health effects. In a dissertation on the subject of urban odors, the author gives examples of a natural gas facility emitting benzene and a pig farm emitting H2S. In neither case did the pollutant itself smell, but the co-pollutants were enough to start an investigation.
-Curren, J. 2012. Characterization of Odor Nuisance. UCLA.

Posted by Self Replicate at 1:36 PM